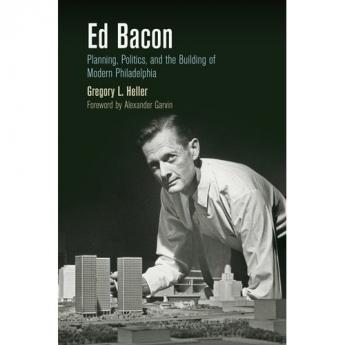 Greg is Senior Advisor at Econsult Solutions, Inc. in Philadelphia. His writing on city planning has appeared in Next American City, the Philadelphia Inquirer, and Imagining Philadelphia: Edmund Bacon and the Future of the City, also available from the University of Pennsylvania Press.

Read on for more details on Ed Bacon:

"Edmund Bacon, probably the most relentless and determined of all planners, believed that the most important and difficult thing to do was deciding what to advocate and that the trick in making that decision was selecting something that you could bring to fruition. . . . We are fortunate in having this stunning biography by Gregory Heller. The result is an engrossing story explaining how modern Philadelphia took shape." —From the Foreword, by Alexander Garvin

In the mid-twentieth century, as Americans abandoned city centers in droves to pursue picket-fenced visions of suburbia, architect and urban planner Edmund Bacon turned his sights on shaping urban America. As director of the Philadelphia City Planning Commission, Bacon forged new approaches to neighborhood development and elevated Philadelphia's image to the level of great world cities. Urban development came with costs, however, and projects that displaced residents and replaced homes with highways did not go uncriticized, nor was every development that Bacon envisioned brought to fruition. Despite these challenges, Bacon oversaw the planning and implementation of dozens of redesigned urban spaces: the restored colonial neighborhood of Society Hill, the new office development of Penn Center, and the transit-oriented shopping center of Market East.

Ed Bacon is the first biography of this charismatic but controversial figure. Gregory L. Heller traces the trajectory of Bacon's two-decade tenure as city planning director, which coincided with a transformational period in American planning history. Edmund Bacon is remembered as a larger-than-life personality, but in Heller's detailed account, his successes owed as much to his savvy negotiation of city politics and the pragmatic particulars of his vision. In the present day, as American cities continue to struggle with shrinkage and economic restructuring, Heller's insightful biography reveals an inspiring portrait of determination and a career-long effort to transform planning ideas into reality.